In memory of
Private
Arthur Zimmerman
who died on November 9, 1917

Commemorated on Page 355 of the First World War Book of Remembrance.

Arthur Zimmerman was born in Wiarton ON, on Jan 6  1893. According to the 1901 census, his parents David Zimmerman and Mary Siep were both of German descent and Arthur and his siblings, Clara and Harvey were raised in the Lutheran faith. Shortly after that census, Mary Siep died and David Zimmerman remarried in 1904, to another German woman, Albertina Schroeder. David and Albertina had 4 children, half siblings to Arthur but it appears they didn't have a close relationship. On his attestation papers in Dec of 1915, Arthur Zimmerman listed his sister Clara as his next of kin.

The Canada, CEF Commonwealth War Graves Registers, 1914-1919 record gives little information about the death Arthur Zimmerman other than he died of wounds at No. 13 General Hospital in Boulogne, France. 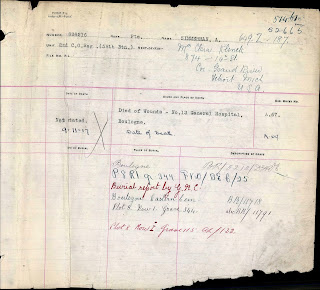 I could find no images for Arthur Zimmerman or his burial place but I located a few photos of the Boulogne Eastern Cemetery including this note:

On high ground overlooking the valley in which the town is situated. Boulogne was one of 3 Base ports most extensively used by the British Armies on the Western Front. Records 4696 UK, 438 Canadian, 307 Australian, 74 New Zealand, 38 British West Indies, 15 South African, 4 New Foundland 2 Bermuda and 4 Egyptian burials.

In memory of
Private
Theodore George Young
who died on November 23, 1918

Commemorated on Page 527 of the First World War Book of Remembrance.

Unlike most of the soldiers I've researched, Theodore George Young was drafted to the Canadian forces, and signed up in Edmonton AB in June1918. At 34 he was considerably older as well.

Theodore George Young was born in York (Toronto) on March 12 1884, to Samuel Young and Catherine Louisa Einboden. I was able to find him on the 1891 and 1901 Canadian census still in Toronto with his parents and 8 siblings but by 1911 he was no longer living at home and there are no Theo's and  far too many George Young's to be certain which, if any are him.

Theodore Young passed his army physical in July of 1918 and was presumably sent overseas shortly after. Without access to more of his military records it's impossible to know if he ever saw combat. Thirteen days after the armistice on 11 November,  Theodore Young died of influenza and cardiac arrest and was buried in a parish churchyard in Wales, UK. 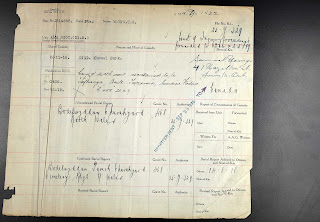 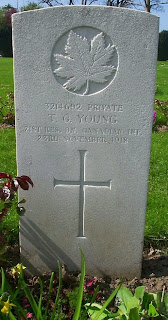 In memory of
Private
James Joseph Wheeler
who died on November 21, 1916

Commemorated on Page 129 of the Newfoundland Book of Remembrance. 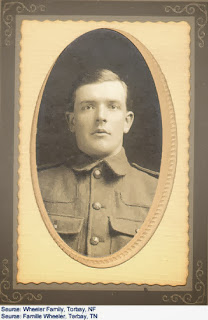 In my lifetime Newfoundland has always been a province of Canada so it feels odd to think of a time when it wasn't.  It becomes very apparent however when searching for records; the Canadian military records from WWI don't include Newfoundland. James Joseph Wheeler was born in St John's Newfoundland about 1892 but a search of Ancestry left me with very little. A google search for Newfoundland military WWI brought up a multitude of websites

From a History of Newfoundland by Claude Bélanger, Marianopolis College

The most useful site for my purposes turned out to be The Newfoundland and the Great War database. There I was able to find an entire file on James Joseph Wheeler, including his Newfoundland Regiment attestation papers. 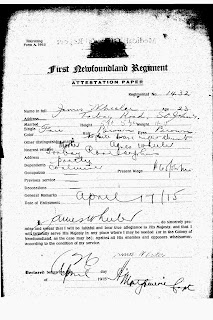 In the files was several communication to James' parents, John and Agnes Wheeler, including one that indicated that he had been wounded on  Oct 12, 1916 but remained on duty. 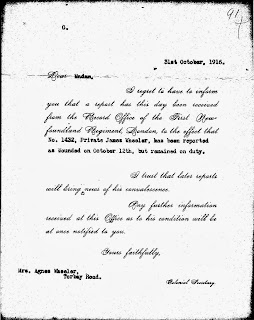 I also located a service record for James Wheeler which indicated that he served 1 year, 219 day before dying of wounds to the arm, leg and chest. 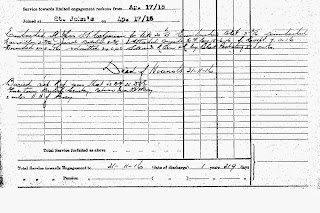 His parents received a notice dated Nov 23 1916 to inform them that their son was gravely wounded; sadly James had already succumbed to his wounds and another notice was sent on Nov 28 to inform them of the death of their son James Joseph Wheeler. 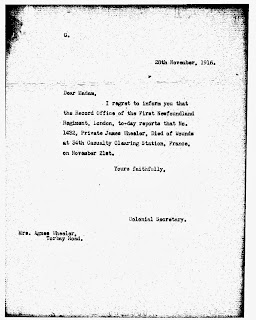 James Joseph Wheeler was buried in Somme, France. His parents received a photo of his  grave marker. 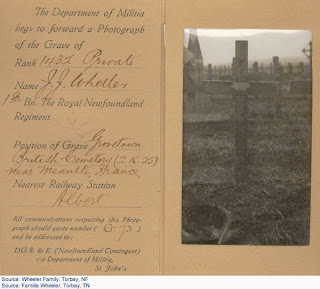 It was later replaced by a more permanent marker bearing the Moose Emblem of the Newfoundland Battalion. 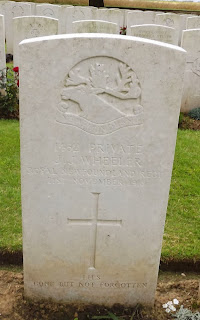